HomeArticles | NewsInterviewsIt’s Not Who Will Head The CFPB, It’s What Is The Future Of The CFPB?

It’s Not Who Will Head The CFPB, It’s What Is The Future Of The CFPB?

The fight over control of the CFPB will likely get nasty before it is over, currently it’s just another tweet for President Trump. The real question is the new direction of the agency not who is in charge. Whether its the current Deputy that is put in power or Trumps appointee, Mick Mulvaney it’s the future of the agency that we should all be concerned with.

President Trump has stated recently “Financial Institutions have been devastated and unable to properly serve the public. We will bring it back to life!” which makes clear his desire for the agency is to re vamp or delete the agency. So what happens to the Debt Collection Industry if the agency is dismantled? What if it is just neutered? Lets explore these possibilities.

What if Mulvaney takes over ?

He will first of all have to evaluate the landscape as most of the staff are Elizabeth Warren diehards. Mulvaney has also called the CFPB “one of the most offensive concepts I think, in a representative government,” and claimed, “We have created … the very worst kind of government entity.”  So he has not made any fans over there on day 1.

Mulvaney will have to bring his own Lieutenants if he is to get any cooperation for change. I am not sure that change can be enacted without a complete rollover of staff in the CFPB.

Either way it cannot happen quickly organically it will take a flush of staff to make anything happen quickly and I am not sure this can happen in less than a couple of years. In my opinion there will be no change in the agency till 2021 in this scenario.

What if Leandra English Takes Over?

Richard Cordray snubbed Trump by instating Leandro English to the open position vacated by himself starting the current drama.  Likely there ill be a fight from President Trump and the Republicans to reduce the power of the agency but that will be quite a fight as the agency is just “too powerful” the exact problem that Republicans have with the agency. 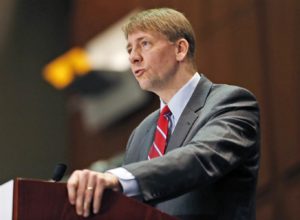 If English is to take over she will have the power and the staff to take her former bosses ideas to fruition. With a room full of high paid Warren supporters she will have the staff, money and power to move forward in the same direction as Cordray.

What if The CFPB is dismantled?

I ask my friend Stuart Wolpoff  a well known ARM industry veteran “If The CFPB was dismantled who would the ARM industry answer to now? The FTC?” Mr. Wolpoff responded “I would assume that the FTC would resume enforcement rolls for the ARM industry once again, but I do not believe that the CFPB can ever be dismantled.  It may be folded into the FTC or the SEC, but the consumers still need a place to turn to help weed out the bad eggs in our industry.”

I agree its too difficult to untangle the agency but it can be neutered and most of the oversight of the industry returned to the FTC. Mr. Wolpoff continued ‘The CFPB should be revamped to allow for all sides to be heard, not just the consumers.  Government must be fair and balanced just like Justice should be.  Shooting first and asking questions later is not something that allows for harmony, and in today’s electronic, instant communication twitter-fed world, we need harmony.”

So whats likely to happen?

Back to Mr. Wolpoff’s opinion, he stated “The CFPB needs to realize that there are many GOOD owners and managers in the ARM world who try to bend over backwards to make sure that consumers rights are not trampled on.  However, a higher authority looking over the industry is not a license to let consumers stop paying their debts when they do not feel like it.  When a debt is owed, a debt is owed.  No matter how it is looked at, that dinner that you put on your credit card in 2015 needs to get paid for.  The restaurant was paid, and the bank that issued the card should be paid back too.  There is no such thing as a free lunch.”

This is well said, the fact that “some consumers” are getting away with debt is costing “all the consumers” and this is what the CFPB has been missing since it’s inception.

Only time will tell what happens but Trump and Mulvaney have an agenda that will be hard to complete quickly due to the strength of the CFPB. The ARM industry needs a break and so do the consumers my hope is we both get what we want for the holidays.